Tami Ough is a fitness competitor from Oregon. She stands 5’3″ tall and weighs about 125 lbs. She has been married 13 years, and has two children. Tami’s “day job” is working as a registered nurse. I haven’t seen any sign of Tami since she placed 1st in the Oregon Ironman in 2004. Like many fitness ladies, she was passionate about gymnastics and dance before getting into weight training. She enjoys 4-wheeling with her husband and kids, and seems to do quite a bit of personal training. 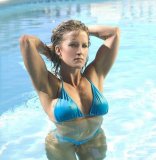 Karen Kryzanoski is a fitness model and competitor from Ontario. She is 5’4″ tall and weighs about 140 lbs. She has been competing for a couple of years now, and wound up winning her first show – the Fitness Star Montreal.

Karen says she was not athletic at all as a youngster. She was overweight, and would get picked on at school. She drastically changed her eating habits, and lost 40 lbs by the time she was 15. She ended up getting into a gym and the fitness lifestyle she now enjoys. She claims the people who picked on her and put her down have given her the drive to succeed.

I could’ve sworn I had profiled Melissa Coates before, but I searched high and low and don’t see a post about her. Melissa is kind of a Jill of all trades. She is a fitness model, pro physique competitor, and a wrestler. She currently does a lot of work with the WWE. Other wrestling babes. She grew up in Canada and had plans to become a veterinarian (graduating with a BS in biology). Melissa has been lifting weights since she was 11 years old, which helps to explain her thick muscle and amazing strength.

Allison Baver recently did a pictorial for Muscle & Fitness magazine and totally captured my attention at that point.

She is an Olympic athlete, her specialty is speed skating on ice. She was a soccer player and cheerleader as a youngster, and took up speedskating when she was a junior in high school. The 2010 Winter Olympic Games in Vancouver marks her third Olympiad, and I’m sure she is going to kick some butt. Allison is 5’4″ tall, and she graduated with a bachelor’s degree in marketing from Penn State, with an MBA from NY Institute of Technology. The best thing about sexy female skaters are their legs.

I’ve tried to demonstrate just what I mean by these pics. Let me know if you approve!

Allison’s mom was a seamstress, and apparently Allison learned a love for clothing and style. They work together to design feminine sports apparel.

Awhile back, Allison was basically accused of having butt implants. I guess her butt looks too good to be all-natural? She vehemently denied the rumor. She is all about teaching fitness and positive body image to younger girls. I’m guessing implants of any kind would rub against the grain as far as that message is concerned.

I think her butt is pretty much “normal” when it comes to fit babes. She was an olympic caliber skater, so obviously she is going to have some glute development. The fact that she has to worry about folks accusing her of implants speaks volumes about just how good her body looks!

She started the Off the Ice Foundation, which is geared toward helping children achieve great things. Many athletes have a popularity that gives them a platform to push an agenda, and clearly Allison is altruistic enough to want to help kids all over the world.

Allison ended up getting engaged to her boyfriend who I believe she met on the show Millionaire Matchmaker.

As you can probably tell, Christina Lindley has been gorgeous her entire life. She competed in beauty pageants when she was in high school. But it wasn’t until after she graduated that she joined a Gold’s Gym and got in fantastic shape. She also became a certified personal trainer. It wasn’t long before she was in magazines and even landing small roles in major movies. She is 5’9″ tall, weighs 125 lbs, and measures 36C-24-36. She is doing all kinds of celeb poker stuff these days, and it looks like her website is no longer accepting members.

Sarah Chilia grew up in Ohio and still lives in that area. Because diabetes and heart disease run in her family, Sarah always tries to eat clean and healthy. She does bootcamp classes and tons of cardio to get ready for contests. What is “tons”? Try two 30-45 minute sessions every day, five to six days per week! She got into fitness competitions because she looked so dang good her friends insisted she enter one.

Lacey Lynn doesn’t mess around. Although she epitomizes fit women and the ladies of the fitness industry, at her core she understands that she is a model. She owns a personal training company and works for various supplement and fitness-industry companies doing promotional work. She knows the way she looks and being in good shape is critical to putting her best foot forward. She eats a very clean diet year-round, very rarely cheating. She doesn’t smoke or drink, and though she describes herself as bubbly and fun loving, she is known as a consummate professional.

Lea Newman is 33 years old and lives in Florida. She is about 5’4″ tall and weighs 125 lbs. She grew up in New York and traveled a bit as a college student and as a member of the United States Air Force where she served as a Chinese linguist. Lea was active but overweight as a child, and during a particularly busy time in her life she found she weighed an astonishing 170 lbs. She started getting into the gym and doing more and more cardio, when finally the competition bug bit her. Both her beauty and her fitness seem to help her place well in the competitions she enters.