Just a random muscular blonde gal. Skintight leggings and fabulous blue eyes. If you know who she is, give me a shout. 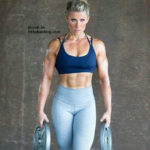 Amanda Folstad is knows for being one of the nicest ladies in female fitness. It seems like every time I’ve seen her in a contest, she is in A+, 100%, top shape. Sometimes we hear feedback from judges on the female side of the sport that they don’t want to see ladies looking too lean. I really think that has hurt Amanda a few times, as she always gets her diet practically perfect and seems to come in shredded. This is part of the debate and the dichotomy of female fitness.

She had bounced from figure contests to bodybuilding contests, which really is a classic way of dealing with a “criticism” of being too lean or too muscular (at least for women).

Amanda got started in the sport when she was 18. She was just dabbling at first, mainly with the goal of dropping a few pounds and looking better. But as a few months turned into a year, Amanda became more aware of other ladies in the iron game, and she started setting serious goals to be on the cover of magazines and compete.

I’ve seen/read in interviews where Amanda laughs about being addicted to competing. At her level, so much time an energy is put into living the lifestyle that promotes success, that it really becomes a let-down when your effort isn’t validated with good placings. To help her ease into contest shape, and to keep her mentally in the game, Amanda says she rarely goes more than 10-20 lbs over her contest weight, which really isn’t much for a person with her size. END_OF_DOCUMENT_TOKEN_TO_BE_REPLACED

It’s hard to say enough or to get enough of Jamey Peters. Moving from women’s bodybuilding to women’s figure, the distinction is a tough one. Figure was really created to capture the feminine muscularity that some say women’s bodybuilder’s lack as they bulk up and become more vascular. Jamey really epitomizes the women’s figure champion bloodline.

Jamey is able to present a ripped, muscular physique, while striking just the right balance between size, muscularity, and femininity. She is 27 years old, stands 5’4″ tall, and weighs around 128 lbs in the off-season. Jamey is from Washington state. She was into powerlifting for awhile before she started competing in figure, so it’s hard to believe her long lean, feminine muscles.

Tanji Johnson has historically helped Jamey prep for contests, and the results seem to speak for themselves. She won her class as well as the overall title in the 2011 NPC Northwestern Championships. She then placed 3rd in the NPC Emerald Cup, and took an incredible 1st place in the 2012 NPC Los Angeles Championships.

With the athletic background, the know-how to get the training and the diet just right, the genetics that help propel her to greatness, and the support she has from people who are in the know, we are expecting many great things out of Jamey Peters! 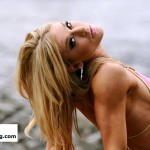 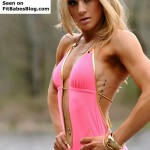 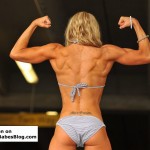 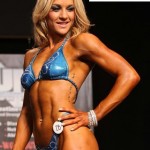 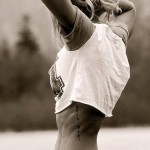 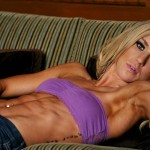 We started out attempting to post a profile for fitness model Christina Thomas. Christina hasn’t been active in awhile, it was tough to find recent info on her, either regarding modeling or competing. But in searching, we came across photos that look like Christina, but show a drastic increase in muscularity.

As you look at the attached pics, you will see in some cases a beautiful young lady who is fit, muscular, and looks like a fitness competitor. But in other images, you will see a body type more aligned with bodybuilding – much more developed and muscular. Are they the same person? It’s hard to be sure. END_OF_DOCUMENT_TOKEN_TO_BE_REPLACED

Carolyn Sessa is a 28 year old Figure Competitor with a bodybuilding background. She hails from Long Island New York. She stands 5’3″ tall and weighs about 120 lbs. She was not terribly athletic growing up, but she had and older brother she looked up to who enjoyed lifting weights. She says her triceps are her best body part. I’m not sure I can agree with her, but let’s just say she has many nice bodyparts and leave it at that!

As hard as it is to imagine, Britney Spears was one of her early idols, and she says she started working out in an attempt to look just like her. Carolyn does a lot of modeling, and it’s easy to see why. She has an amazing body and some really pretty features. END_OF_DOCUMENT_TOKEN_TO_BE_REPLACED

Amy Schmid is a bodybuilder who is really pretty big and muscular, but somehow manages to blend that in with a physique that is very symmetrical and proportionate. Amy’s history is very interesting. She was active growing up, playing all kind of sports and not being one to sit on the couch watching TV or playing video games. But when she was 18, she developed an odd disease that left her paralyzed for some period of time. To help with her recovery, she started lifting weights, and learned all about bodybuilding and nutrition. It was only one year after she first started lifting weights that she entered her first bodybuilding contest. To say that she fell in love with the iron lifestyle is an understatement. To a certain extent, it seems like Amy set out with something to prove. She wanted to show the medical community that she could fully recover from her illness, and not just survive but flourish. END_OF_DOCUMENT_TOKEN_TO_BE_REPLACED

Listy Allen is from Virginia and lives in Colorado. Actually, she is from all over. Both of her parents were in the military, so she moved around a lot as a kid. She is 5’6″ tall, and weighs around 140 lbs (she competes at 125 lbs). Her measurements are 34D-26-34. Her blonde hair and blue eyes tend to attract a lot of attention, especially since they are paired with such a knockout body. She is getting ready to turn twenty four years old, and has held a Pro Card since 2009.

She was always active. She played softball, soccer, and dabbled in both track and field and cheerleading. She started lifting weights when she was a Freshman in High School. END_OF_DOCUMENT_TOKEN_TO_BE_REPLACED

Lisa Cross is a female bodybuilder who lives in Great Britain. She is thirty four years old, stands 5’6″ tall, and weighs about 150 lbs when she competes. She started lifting weights almost ten years ago. Granted, ten years is a long time, but considering the amount of muscle she carries, she has made some serious progress. She began competing in 2009. This isn’t a prissy little lady – she claims her favorite exercise is squats, and judging by the quality of her legs, she doesn’t deny herself the fun of them very often.

Lisa used to be a police officer, and an English teacher. She has lived in Russia, Japan, and France. She says bodybuilding really is a lifestyle, and in order to be successful it has to be able to affect everything you eat and drink, how you live, and even how you sleep. Her favorite part about being a bodybuilder is being in the gym and lifting weights. She loves the pump, the variety, everything about it. It’s refreshing to see somebody who loves to train for the sake of training. Many of us may have lost that at some point over the years. END_OF_DOCUMENT_TOKEN_TO_BE_REPLACED

Originally from Finland, 31 year old Noora Kuusivuori is now residing in Colorado. Growing up, she played baseball and was a swimmer. She was talented, ending up at the world championship level. She was also involved in volleyball, track and field, and jazz danzing. She started weight training at the age of 14 as a part of a program to improve her athletic performance.

Noora won the tall class at the 2010 Colorado State Figure Championships. She says she loves training, and her favorite body part is her glutes. Several guys would agree with her I’m sure. She is 5’10” tall and weighs around 145 lbs. She’s no waif, this gal is strong. She’s been known to pound out 5 reps with 85 lbs when doing biceps curls. She once amazed other swimmers by doing several sets of 10 reps for 225 lb squats. END_OF_DOCUMENT_TOKEN_TO_BE_REPLACED

Like a comet that only swings by every hundred years, or maybe a four leaf clover, Charise Parker is pretty rare. She recently won 1st place in the women’s lightweight bodybuilding competition in San Francisco, while she also competed in the figure contest and placed second. Now that really says something about her beauty, symmetry, grace, and stage presence. END_OF_DOCUMENT_TOKEN_TO_BE_REPLACED