It is a little embarrassing that we have never posted before about Cory Everson.

Cory is most famous for the fitness show she starred in called Bodyshaping, then Gotta Sweat. I think the only person who is more recognizable for this type of fitness fun is Gilad. 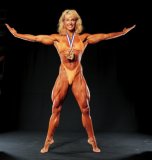