Emily Carey is an NPC Bikini Competitor. She 5’6″ tall and weighs about 120 lbs. Like many of the ladies we find ourselves profiling here at FBB, she has always been athletic and led an active life. She grew up with gymnastics, dance, soccer, and swimming. She played soccer for a decade, all the way through her college years. When she attended a NPC show one of her friends had entered, Emily was captivated by the muscular and fit ladies she saw on stage. She says she didn’t thing she would ever have enough muscle mass to compete in figure, but decided she would try the bikini division.

She says she has particular interest in nutrition. It shows, as she always seems to be spot-on regarding her lean physique. She occasionally lifts heavy, and also tends to include plyometrics in her workouts. Emily’s blonde locks and stunning good looks may give her an advantage on the stage, but it’s clear she trains hard and approaches her diet with discipline and intelligence.

HIIT plays a role in her shape. She says she prefers High Intensity Interval Training to traditional steady-state cardio because it keeps her from getting bored and seems to be more effective in producing results. She does not like to take days off – this girl is a workout fiend! 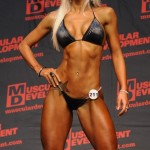 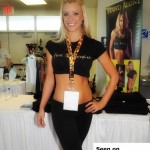 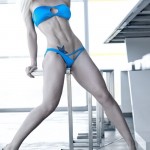 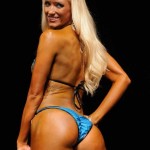