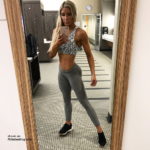 Heidi Powell recently placed 5th in the bikini division of the 2018 IFBB Dennis James Pro. I think it’s about time we do an in-depth profile of her here on FBB!

The fact that she currently has 439k followers on her Instagram feed speaks to how popular she has become.

I would definitely classify her as a “celebrity trainer”, not in the sense that she trains celebrities, more like she is a trainer who is a celebrity.

She was born in Phoenix Arizona in 1980.

She and her husband Chris Powell began hosting the television show Extreme Weight Loss in 2011. That was really her first launch into fame.

In 2015, she published the book Extreme Transformation: Lifelong Weight Loss in 21 Days.
It has sold thousands of copies, and gets 4-star reviews on Amazon. 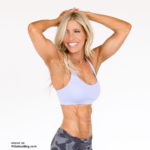 She has her own clothing and accessory line that she likes to associate with a positive body image. She uses the tagline “Perfectly Imperfect”.

Heidi has four kids, and her marriage to Chris is her second. She is a certified personal trainer, with both ACE and CrossFit certifications. As of 2018, she is 36 years old.

It appears as though Heidi began competing in 2015. She may have started before that, but that’s what shows up when I research her history. She has placed as high as 1st and as low as 17th. 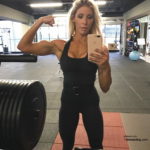 Heidi has her own youtube channel with 34k subscribers and 131 different videos. A few that caught my eye are pasted below.

WellAndGood conducted an interview with Heidi and husband Chris not too long ago. Here are some of the questions and responses.

1. Do you find that exercise is more effective if it’s something a person really likes? Heidi: Hands down. Like right now we have 19 people in Colorado for season five, and we have to be really careful to do 19 different things, at least, throughout the week, so everybody gets a chance to do something that they love. Our goal is that, at the end of the three months, when they leave Colorado and go home for the next nine months, that they’ve all found one, two, maybe three things that they really love doing. Because there’s nothing worse than being forced into say, CrossFit, if you hate that feeling. Or being forced to do Zumba, if you just hate dancing. If you love dance, you can dance for the rest of your life and be fit. Or you can play tennis and be fit. Even something as simple as playing with your kids on a jungle gym. Isn’t that Parkour?

2. Sure, why not? What are some of the things people on the show have found to work for them? Chris: Last year, Kenny found tennis and yoga, loved them, and he lost 200-plus pounds. Charita found Zumba, lost 200 pounds, and is actually one of the faces of Zumba now. Everyone’s like, ‘What’s the magic workout?” And I’m like, “Well what do you love to do? That’s the magic workout.”

3. So what are your own magic workouts? Chris: CrossFit…I love doing clean and jerks and snatches. Heidi: I go on different kicks. CrossFit, for sure, because I never knew I could feel so powerful. It’s cool to load a bar with a lot of weight and be able to lift it. I love feeling beat at the end of it. But then also I used to do a lot of endurance sports, and I loved running. I love yoga, too.

4. And how do you manage to find time for your own workouts when you’re filming and traveling and taking care of the kids? Heidi: The biggest thing for us is setting the workout ahead of time. First thing in the morning, without a doubt, 100 percent, is our successful formula. It really is. There are days, like yesterday, for example, we say, “We’ll do it right after this thing we have.” But if we say that, it usually gets pushed, because then something else comes in…. If the morning doesn’t happen, it’s about getting something in. Even if it’s a ten-minute AMRAP (CrossFit speak for “as many rounds as possible”) after the kids go to bed and we just hustle out to the garage and do something. We feel better than if we did nothing.

5. Do you also find it hard to eat healthy when you’re on the go or do you have a strategy? Chris: Once we land, we’ll just beeline it straight to the grocery store. Any hotel, you can request a refrigerator and a microwave. Sometimes they might charge you an extra ten bucks, but it’s worth it. Here [in New York City], there’s a Whole Foods right down the street, so we can grab some produce, grab some almonds, grab some meat, grab some whey protein, grab whatever we need, take it back to the hotel, and we’re stocked up. We might drop $50 if we’re staying somewhere for like two or three days. Heidi: Which is one room service bill for one person! Chris: Exactly. And on top of that, since we’re prepping our own foods, we don’t take 30 minutes to get to the restaurant, an hour to eat, 30 minutes to get back…we have really important stuff to do!

A few of our FitBabsBlog followers have written asking about some alleged Heidi Powell topless photos. First of all, we don’t typically get into that, as we try to avoid nudity on the site. Second of all, I don’t think any reports of these types of photos are legitimate, and if they are (which is unlikely) they are not intentional and likely be some type of invasion of Heidi’s privacy.

Her instagram, with what currently has 439k followers, is
https://www.instagram.com/realheidipowell/?hl=en