Abby Lindemann is a 31 year old fitness competitor from the great state of Texas. She is dynamite – a popular fitness model who looks incredible. She is 5’4″ tall and competes at about 117 lbs. I was able to find only a few contests she’s participated in: END_OF_DOCUMENT_TOKEN_TO_BE_REPLACED

Cristiana Casoni is a 42 year old fitness competitor from Italy. She has been rocking the competitive stage for years – really since the 1990’s. Cristiana is 5’4″ tall and weighs 136 lbs. No point in mincing words, Cristiana is best known for her butt. Yep, we try to be relatively family friendly here, but folks there’s no polite way to deal with a butt that fine other than pointing and gasping and saying dayum.

The video below shows her END_OF_DOCUMENT_TOKEN_TO_BE_REPLACED

Every now and then I make a blog post here on FBB that I’m pretty much certain will viral. Sometimes this is because I find myself so witty, humorous, and charming. Uh, usually it’s because I’m profiling an incredibly hot babe that nobody will be able to resist. I’ll let you guess which one this is, but I’ll give you a hint: Ana Tigre.

I tried to limit myself to just a few pics of Ana Tigre, but that would’ve required much more self restraint than any normal man is capable of. So I whittled down the 150 to like 13. END_OF_DOCUMENT_TOKEN_TO_BE_REPLACED

Elena Panova is a professional bodybuilder from Russia. She is 31 years old, stands 5’4″ tall, and usually competes at around 136 lbs. Elena grew up in the era of some amazing female bodybuilders, looking up to the likes of Lenda Murray and Cory Everson. She graduated college with a degree in Public Relations, but found herself attracted to the fitness and bodybuilding industry. She competed in her first contest in 2003, and became a personal trainer in 2004. END_OF_DOCUMENT_TOKEN_TO_BE_REPLACED

Julie Bonnett is a 30 year old WBFF Pro and fitness model. She was Ms Fitness Manitoba 2008. She stands 5’4″ tall and weighs about 125 lbs. Julie has been in pretty much every fitness magazine ever printed including:
Oxygen
Inside Fitness Magazine
Status Fitness Magazine
MuscleMag International
Fit & Firm

Jaylie Nicoll is a fitness model and personal trainer who dragged herself up by the bootstraps through a very tough weight reduction campaign. She had a tough childhood and came from a broken home. She loved the challenge of lifting weights, and she competed in her first fitness competition only 11 months after she started training. END_OF_DOCUMENT_TOKEN_TO_BE_REPLACED

My, my – there is just something about hot chicks in bikinis isn’t there? It’s a little bit like naughty lingerie except women are actually supposed to wear it out in public. I don’t know who thought of this idea, but kudos to them!

Bikinis became popular back in the 1960, driven mainly by Hollywood and the big screen. It’s silly to attribute modern bikinis to the likes of Jantzen or French fashion designers considering there are plenty of statues and paintings of the Greek Goddess Venus from the old Roman era showing her strutting her stuff in a bikini.

I grew up drooling over Princess Leia in her shiny gold bikini in the Return of the Jedi, and man I’ve only grown more fond of them since. Here at FBB, we love paying homage to hot chicks in bikinis, and you our devoted readers/visitors are the primary beneficiaries.

There are tiny bikinis and conservative ones, fuzzy ones, sleek ones, sporty ones like what we see in the Olympics, the list is endless. It was reported that almost a billion and a half dollars worth of bikinis are sold every year. This make sense, because we all know ladies have to buy new ones every year, aren’t ever satisfied with the fit or the look of the one they have, and will sometimes buy two or three because they can’t decide on a favorite. The average bikini costs $40 or more. Some women are shameless about buying used bikinis, which I find interesting since that’s not much different than buying used underwear (which has never seemed terribly popular). Fitness models frequently buy, sell, and trade posing suits, bikinis, workout wear, etc so why not bikinis?

Bikini contests seemed to be a legitimate source of income for chicks who had it and didn’t mind showing it a little. And this was before the NPC Bikini division was started. At this point, girls have a great chance to have a classy bikini showing and help promote their fitness modeling and spokesperson efforts.

It’s not so much what bikinis reveal as what they cover up. Hot chicks know what to leave up to the imagination, and what they show is always oh so tantalizing. Sexy bikinis are great, but I’m always more entranced by the bodies that are in them. We have to be thankful that we have the modern bikini to celebrate, but just as importantly we have to appreciate what has come about as a result. Where would we be without the bikini wax, bikini contest, and the mankini?

Some beauties from the past: 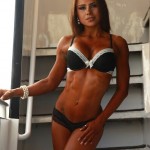 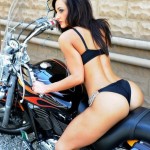 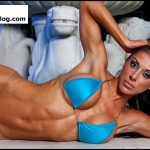 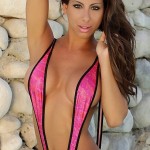 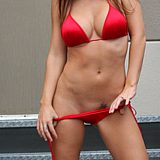 Asian fitness models seem to be a rather hot topic in the industry these days. Although we were “smart” enough to devote our own category awhile back, we really haven’t discussed what’s going on with this trend. Well it’s time to tackle the topic.

There are a couple of reasons why publishers would specify Asian models for a production. Some efforts simply require a specific ethnicity. So if you are producing a commercial for a toothpaste branded in Spanish and offered mainly only to markets in Mexico, you would most likely hire a Hispanic model. Same thing for Asian-market items.

In other cases, the publisher is simply catering to the public’s desires. More specifically END_OF_DOCUMENT_TOKEN_TO_BE_REPLACED

All the fitness ladies we profile here on FitBabesBlog are noteworthy in their own regard. Some have incredible stories where they’ve overcome adversity and sculpted their physique against the odds. Some are amazingly athletic, and have a history of talent and passion that demonstrates their commitment to whichever sport they choose to pursue. And some, honestly, are just hot. We profile girls for all kinds of reasons, and we ain’t ashamed to admit sometimes we’re shallow. If you’re hot, and fit, ya got a chance of attracting our attention kid.

So that’s a good place to start with Jen Cook – some serious, A+ level hotness. Female fitness models aspire to different body types. Most want to be sort of lean and not too muscular, while some get a bit bulkier trending more toward the bodybuilder side of things. Girls like Jen Cook and Jamie Eason seem to define the norm. They are what so many fitness models out there seem to be striving for.

Jen is from Texas. She is only 5’2″ and about 115 lbs, but even though she isn’t big END_OF_DOCUMENT_TOKEN_TO_BE_REPLACED

Fitness Model Diets
Competitors and models have tried many approaches to dieting. Different people respond differently to various diets, just as people respond differently to exercises and schedules. No single diet will work for all models. Listening to the advice of others can help keep you from repeating similar mistakes, but doesn’t guarantee your success. You have to go about learning what works best for you individually. This takes trial, error, effort, and practice at the learning process. It may take several years! Varying the amounts and ratios of carbs, proteins, and fats in your diet can have a profound effect on your physique. You may want to make small adjustments on a daily or weekly basis to keep your body off balance and keep it from adjusting and countering your efforts. END_OF_DOCUMENT_TOKEN_TO_BE_REPLACED